Welcome to the pit

2010 it all began... The artist Fatehound was quitting neopets and adopting out all of their pets. If you've never been involved in the social aspect of neopets, you might not know this but actually a common thing for players to do is put their pets "up for adoption" and require people to make applications proving that they're worthy of adopting their pets. A lot of people would just send letters with little essay apps, but there was also a subset of people who made petpage apps where 1 or more custom pages with art and stories and ect would be made. THIS is the layout I used for my amazing app~

...Okay maybe it wasn't Amazing. MAYBE.... it was full of insane ramblings, crossed out text, jokes, and NO art because I made the app in a day before it was due and didn't have access to the family scanner before it was due. I was 12 you know how it is. I'll post his bio from back then below so you can have an idea of what the whole page was like.

too many to name them all.mostly Bread,Degny,Shallow,and 2w9.with a couple of others that don't have names.

blitzhund's design is fairly simple in a way,and its not a sparkle dog one which makes it even better.his pelt is white with silver stripes.his front legs are actually shorter than his back ones,so he grows the fur on his neck,shoulders,and upper back longer that the rest of his fur to keep anyone from noticing.His ears naturally have holes in them like pigs do,and he swallows his food like a chicken.A small winged top hat floats above his head,and a small bulb weighing approximately 5 pounds (i don't remember what weight is supposed to convert to) on his upper lip that causes it to sag.His tongue is purple with blue splotches,and his saliva has chemicals in it that causes humans to enter the REM stage faster (for those days when people are being stubborn about falling to sleep).His stomach doesn't have any fur on it,just fleshy skin.His claws are neon gray.
yes i just said neon gray.
it's possible.
o.o

That is it... NO I hadn't even watched Invader Zim yet this could have been so much more. Also yeah I did hate sparkle dogs and sad angsty backstories back then LOL. I was a bit of a sad prick as a kid. Very assured that I was THE smartest person on earth and not like any of those other Fools... (Yes I did read Johnny The Homocidal Maniac by this point.)

A lot of my oldest art was stored on photobucket; which as we all know died and took millions of pictures with it. I have an archive of my account Somewhere... Until I'm able to find and root through all that though, here's one of the few pictures of the original Blitzhund design. 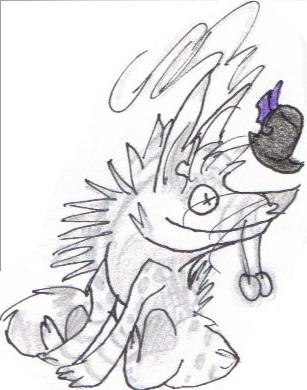 There he is! In chibi glory. After I adopted Blitzhund I threw him on a side account and pretty much forgot about him for a year. Yay!!! 12 year old attention span haha.

In 2011 a huge plot happened on neopets and I brought Blitzhund over to my main account because he's my only pet with any semblence of stats thanks to Fate training him a tiny bit. The original design for Blitzhund was soooooo last year, so naturally I turned him into some kind of fire breathing bird skull dog creature? 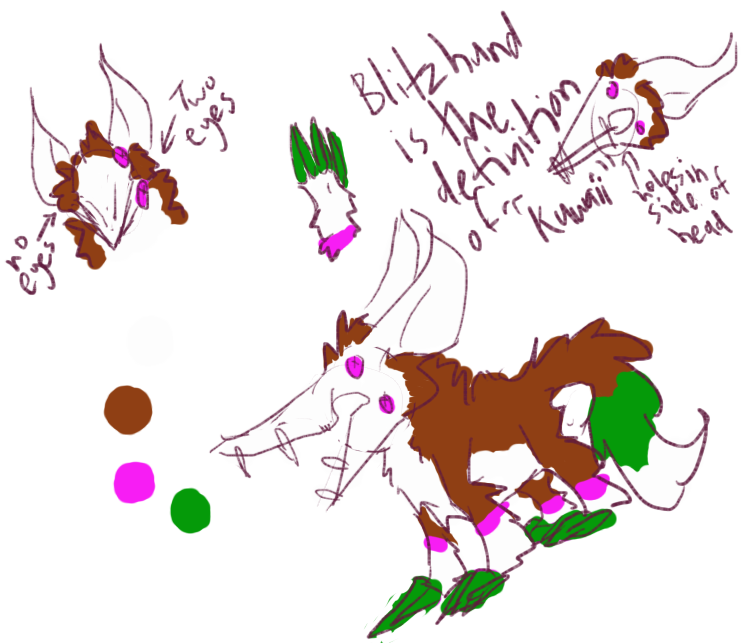 This Blitzhund was a little baby boy in a town of creatures like him. They lived in the ground until The War came and they had to fight the sky creatures. Blitzhund tragically DIED in a battle- being impaled through the weird bird head and neck and heart. RIP to him. This design lasted for years and I even made my first plushie ever based off it! That thing is missing, so plz wait for a further update to see. 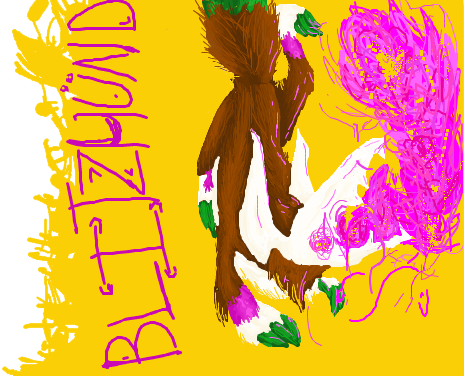 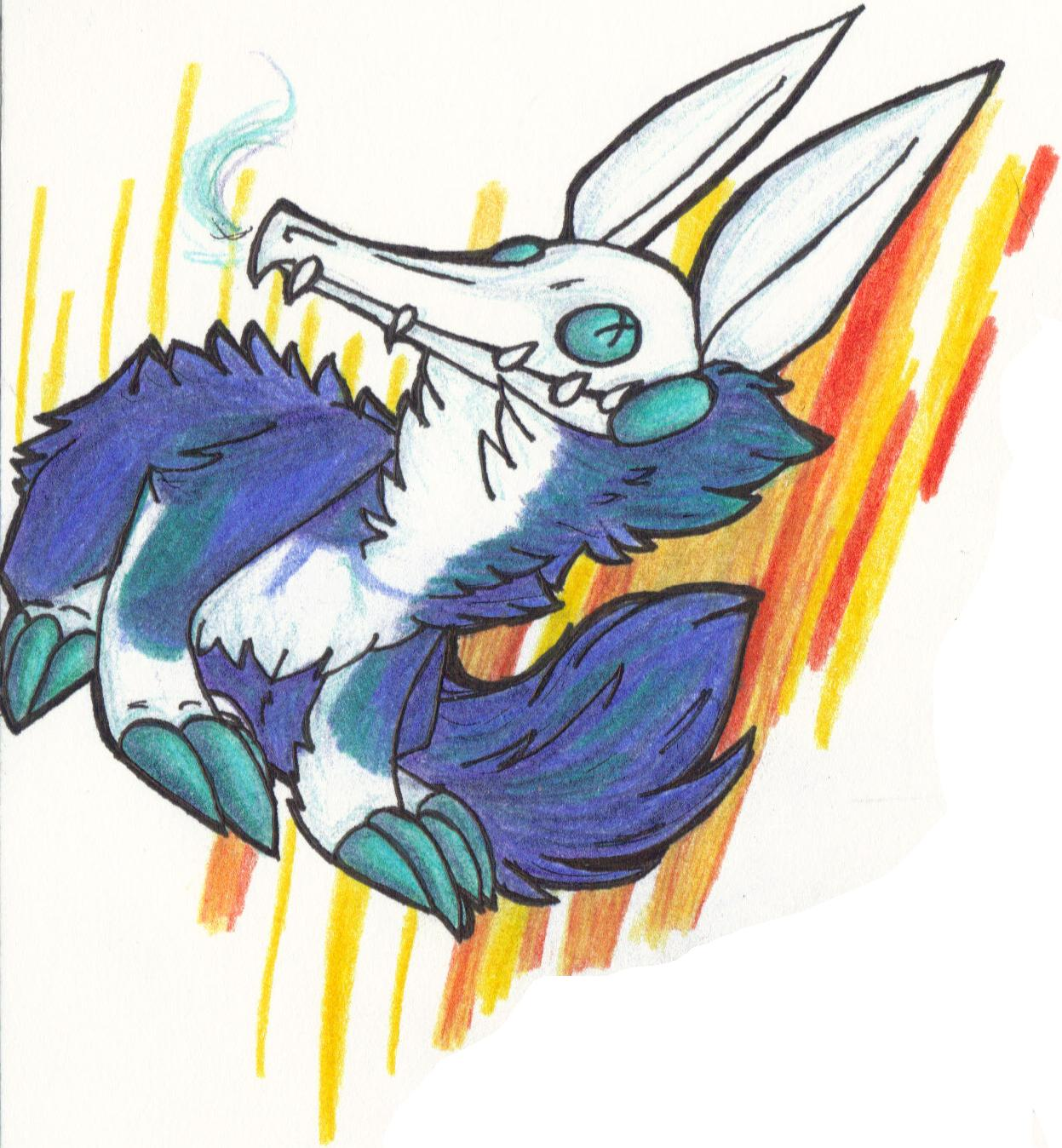 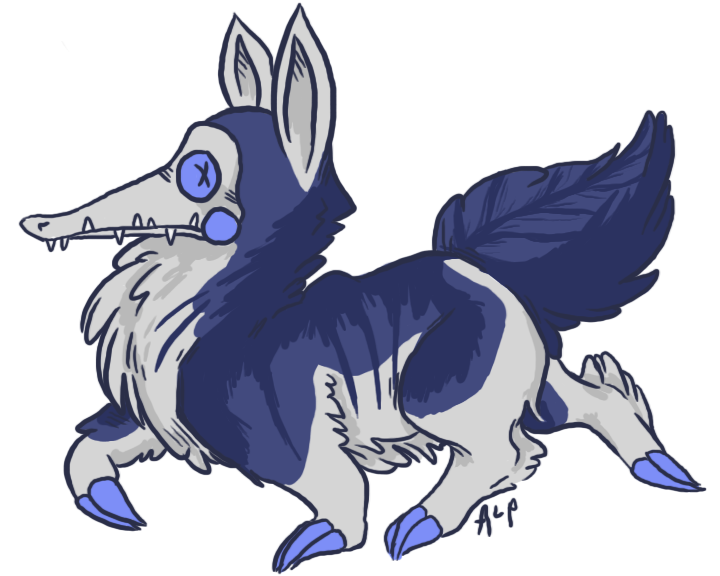 
There was MUCH more art of this incarnation that never got scanned. Maybe one day I'll bring out my old sketchbooks and scan them. The cause of death for this Blitzhund was due to one imporant factor: his head. Interesting design! Young me did not feel confident in drawing it though. Much of the unscanned art is page after page of me trying to translate what I was imagining to a drawing. In 2021 I took a shot at going back to this old design, now making him fully pink! Just for fun, though, I don't have any plans to revive this design or story at the moment. 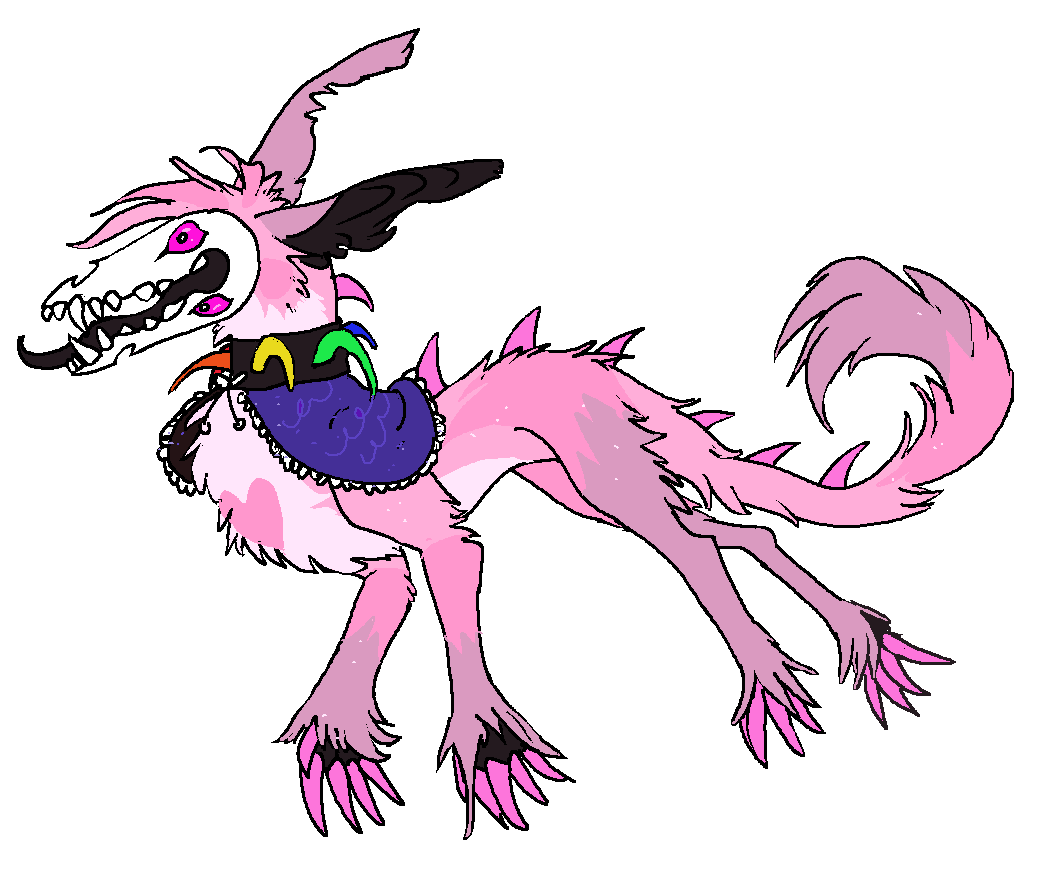 return to the art hub